When choosing a marathon to run, considerations often include a scenic course, a fast course, a destination course, or perhaps simply a course in a convenient location. The Chester Marathon mostly fits the last two elements, although you probably won’t see the race listed in any Top 10 Destination Race lists. Still, I would argue that maybe it should be. Why? Because Chester is a picturesque city with a lot of history. It’s a short(ish) train ride from London. Unlike the London Marathon or other nearby bucket list races, it’s easy to get in to and only costs about 50 pounds. Lastly, the race claims it is the best marathon in the world for watching “Wales” (perhaps, a better spoken joke than written). But, the main reason I headed over to the lesser-known city of Chester was to visit my friend Three Bucks who I had met on the PCT in 2016. And what better way to get to know a city than by running through it!

Perhaps running a marathon just two weeks after the Ben Nevis 52k was not the greatest idea. Or, maybe it wouldn’t have been the worst idea, had I recovered and tapered properly. Of course all these shouldas and couldas are so apparent in retrospect. Yes, two weeks is a bit tight, but this race was more about fun and sightseeing than PRs. After Ben Nevis I took maybe 5 days off, while still managing to get in over 50 miles towards the end of the week. The cautious angel on my right shoulder told me to take it “easy” while the daredevil on my left shoulder told me to test out some speed on an 18 mile training run the week after Ben Nevis, several tempo runs along the Thames, and a speed workout with the Ranelagh Harriers the week before the race. Maybe not all bad ideas on their own, but when combined perhaps not the best choices I’ve made. And to top it all off, I still really didn’t have any great information on what kind of pace I could sustain for a road marathon other than what was blatantly obvious; there was no way I could sustain a PR pace, or even anything close to it.

We arrived to Chester the Friday before the marathon and settled into our lovely Airbnb overlooking the River Dee. Despite the beautiful and comfortable room, I would spend the next two nights tossing, turning, and sweating in my bed. Later I would attribute this to PMS (I got my period the morning after the race). The day before the race we spent exploring the wonderful city of Chester. I usually don’t like to tax my legs too much the day before a race, but with only a limited amount of time, this was the day to do it. We walked around the perimeter of the city along the city walls, ate savory waffles and crepes at Crepe Affair, visited the Chester Cathedral, explored Storyhouse (a library, theater, and cinema in one), and topped off the day with sourdough pizza at Urbano 32. Needless to say, I was not going to be super rested going into the race. 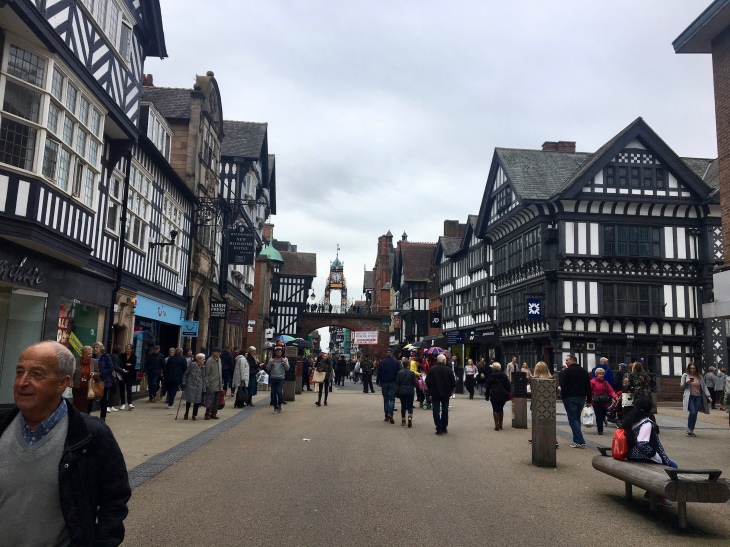 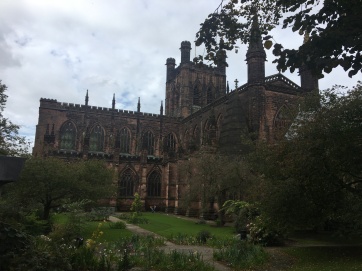 I toyed with the idea of just running for “fun”, but then settled on the same plan I had for CIM last year: start at a 7 minute pace and try and sustain it.  If you’ve run a marathon or any road race for that matter, you may be able to relate to this feeling at the start of a race. Due to race day adrenaline, race pace (and sub-race pace) feels way too comfortable early on, and consequently you go out too fast. This is a feeling I’ve experienced many a marathon, but not this marathon. After two miles of running at 7 minute pace the thought that so clearly dawned on me was, “There is no way that I can sustain this for 24 more miles!” My legs felt like they were filled with lead. I slowed down to around 7:10-7:15, but even this felt extremely difficult. Perhaps a hard taper after Ben Nevis would have been the wise choice, I thought.

The weather was great. The temperature was cool and the sun was out. It rained a little, but more of a heavy sprinkle that brought out a rainbow later on. I consumed a gel every 30 minutes, grabbing them from my new make-shift “pocket” (my sports bra). Two of the gels were ones that I had bought here, High-5’s. They were fruity, syrupy and felt like superglue on my hands. The aid-stations supplied High-5 gels, water bottles, and some orange electrolyte drink also in bottles. The bottles were easier to drink than cups, but pretty wasteful as I’d have a couple of sips before tossing them in the “rubbish bins”. At some point, I passed by a band playing Oasis’ “Wonderwall” along the side of the course, and I couldn’t help but smile. I felt so lucky to be in England running this race, even if I was not performing my best.

For most of the race I continued this 7:10-7:15ish pace despite the fact that I “secretly” knew that I could not sustain it. I guess I was just waiting for that moment when I couldn’t. That moment was about mile 20 although it didn’t come in the way that I expected it to. The leg/hip pain that I had been having since July suddenly became very painful. My pace slowed down considerably, and I wondered if I had pushed this injury too far.

After every mile, I still couldn’t believe that I was still running. The last couple of miles wound around Grosvenor’s Park, and then spit out along the River Dee. At that point, it was a straight shot to the finish and as usual, my Central Governor told me to “go for it”.

I crossed the finish line with a time of 3:12, 6 minutes slower than my PR at CIM last year. Results can be found here. If nothing else, I got a darn good speed workout from the day, and some serious mental toughness training. It’s funny after all of the distances and races that I’ve done, how the road marathon is still one of the most physically and mentally challenging distances. Of course, the level of challenge can be proportional to the level of training and preparedness. Crossing the finish line, I felt like I had just run a marathon without any training. Of course, that’s not true. It is all my consistent training that allowed me to ride that pain cave wave and get myself to the finish. Still, running a marathon without specific marathon training will result in discomfort (in case you needed the reminder). I actually was pretty surprised to get the time that I did, considering how terrible I felt on the course. In retrospect, I would have done a hard recovery/taper between Ben Nevis and the marathon (probably still would not have PRed, but maybe would have been a little more comfortable). I still would have explored Chester by foot the day before the race (no regrets, there). I regret the time of the month race day landed on (PMS perhaps the worst possible time to do a hard effort), but cannot control that. Sadly, I’ve broken my marathon PR streak (Boston being an anomaly), so once I get this hip sorted, I am motivated to get back out there and go for sub 3. Who’s with me?

My name is Meg(an), and I love to run. Via my blog, I hope to offer you my perspective on some of the races that I participate in, and perhaps to inspire you along the way to run in some of these beautiful places. View all posts by Meg