The Armstrong Redwoods 50k is 3 weeks after Lake Sonoma – just enough time to recover and get back out there on the race scene. It’s also the same weekend as the Miwok 100k, which is why Yuch and I haven’t done this race the last couple of years. As much as I love Miwok, I decided to skip it this year and check out some new races and new trails. PCTR’s Armstrong Redwoods 50k is one of Yuch’s favorite races, for a reason that I was not exactly certain of, but was hoping to get to the bottom of.

Yuch thought I could go for the course record (5:05 by Kimberly O’Donnell in 2014 – the same woman who has the course record for MUC). I thought I could not. I’ve had slower times at Way Too Cool and that course has almost half the climbing as Armstrong! That being said, it’s always nice to have something to aim for. However, I would not be using my watch or creating a pace chart. It’s been a long while since my last 50k, and I had no idea how to pace it other than going by feel.

PCTR reserves campsites for the runners and offers them during registration. Initially we had reserved an AirBnb, but due to the recent flooding in Guerneville, it got cancelled in the months before the race. We emailed Greg and were lucky enough to snag one of the remaining campsites at Bullfrog Campground, just 10 minutes from the race start. The campsites seem to vary in size and quality. The one that we reserved was nice enough, but definitely pretty closely packed with our neighbors on either side. The places to pitch a tent (away from the road) are limited as the campsite begins to gradually slope down at a certain point. However, the campground was nice enough, and I would definitely recommend it as the best and closest option the night before the race.

The week before the race, Yuch got sick. He was pretty bummed and I was pretty bummed because this whole tough-50k-three-weeks-after-Lake-Sonoma thing was his idea! He decided to come anyway, and spectate. A couple days before the race, Moriah signed up, deciding that attending and managing her three kid’s field trips in addition to marking the Miwok course, was just not enough on her plate.

The weather was perfect. The Russian River area can get pretty toasty in the summer, so we were lucky to have a clear day, but only getting into the high 60’s. Yuch dropped me off at the race start, and I asked “Where is everybody?” Yuch commented that he saw the finish line arch, and I remembered how small of a race it was. Last year’s race had 160 runners over 4 distances, but only 16 runners for the 50k. With the 50k being the first to start, I now understood where “everybody” was.

And then we were off. Climbing out of the Vistor’s Center on East Ridge Trail, I began to think “I can’t believe I have to do this three times”; a funny thought for someone who ran in circles around Chrissy Field for 24 hours. When I arrived at the Bullfrog Campground Aid Station, I realized that the out and back to get the bracelet went right by our campsite. Yuch had returned back to camp after dropping me off, but I knew he was meditating inside his tent. As I ran by on my journey to get my bracelet, I refrained from shouting for Yuch, so as not to disturb his meditation session. 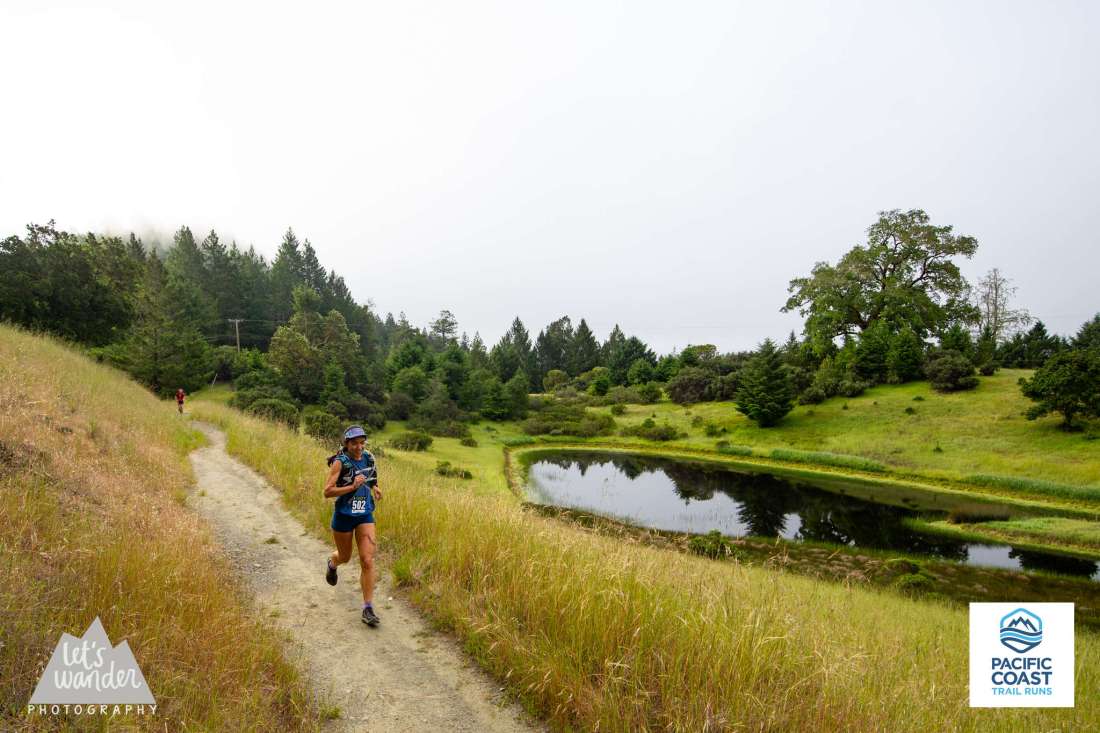 East Austin Creek Fire Road down to Gilliam Creek was a lot of fast downhill. I thought about Yuch’s advice before the race: “Take it easy on the uphills, and bomb the downhills”. With uphills being my strength, I tend to pass people in races on the ascents, and get passed on the descents. This would not be the case this time around. Cramming Skratch gingerbread cookie into my mouth, I passed by two men who, in my mind, were going way too slow for this no-brainer-total-freebie downhill. What goes down must go up, and up we went out of the creek, where the same two men passed me on the uphill as I was reduced to a fast hike. The last of the climbing was done (for the first loop) when I arrived at Pool Ridge Aid Station, and it would be a lot of fast downhill to the finish from here on out. Again, I flew by the same two men.

Arriving at the finish line (for the first loop), friend and volunteer Justin Brandt instructed me to “hit” the finish line, and then “hit” the orange loop again. Easy for him to say. Out of the Visitor’s Center I climbed, again. It actually wasn’t as bad as I had initially thought. I think these things can be mentally overwhelming before they’re actually done, but once I accepted what had to be done and just did it, it was what it was – just moving forward. The second loop was harder, since my legs were more fatigued on the climbing, but went by much faster, as it skipped the out and back by the meditating campers. The day was starting to warm up, and I was glad I had packed two bottles of Gu Roctane Summit Tea, so easy and refreshing to drink during a race! Before I knew it, I was back to the finish line, again. I grabbed some more water for my pack, and as much as I wanted to hang around and mingle with the little people, I went out to “hit” the green loop – just 5.9 miles more. I’m not going to lie – there was a lot of hiking, but I ran where I could, and rejoiced as I arrived at the East Ridge/Pool Ridge short-cut. It was all downhill from here. Groundhog’s Day was finally coming to a close. 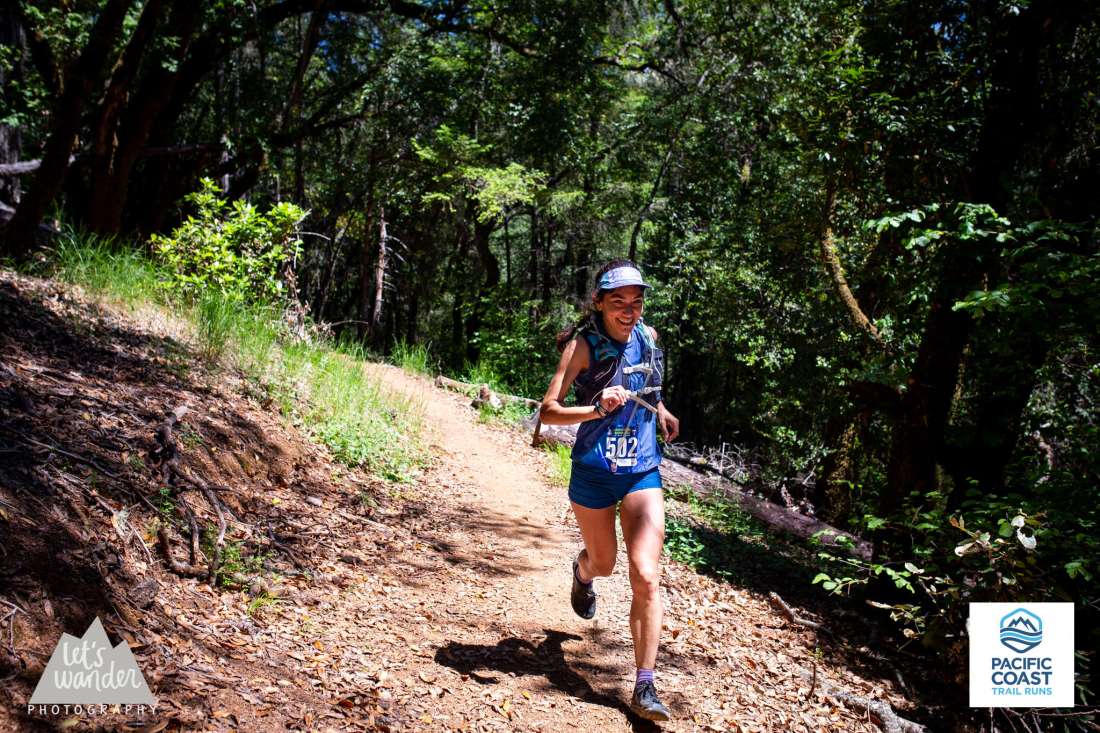 I finished the race in 5:24. At the finish line, I told Greg I had no idea how that course record was set. He responded that the course was a lot easier in 2014. This made me feel a little better about the race and also about what happened at MUC. It’s becoming clear that these races are constantly evolving and courses can differ from year to year, and given we are not running for money here – I’m fine with that. And despite the difference, Vince Dimassa still got a blazing fast time and a new course record.

Suzanna Bon came in second and Moriah in third. I felt proud to stand on the podium with two strong ladies and fantastic runners. I had heard of Suzanna before…perhaps a podcast or seen her name on race leaderboards, but couldn’t place why I truly recognized her. I later found out that she had the old course record at NYOD as well as one of the fastest times at the Castle Peak 100k. Her mileage at NYOD is what inspired me and ultimately guided me to the course record.

I still am not sure why Yuch loves this race so much. It was pointed out to me that the best part of the race was cut out this year and included some ample creek crossings. Armstrong Redwoods is certainly a beautiful park and the views from the ridge are really nice. The technical ascents and smooth descents make for a fast finish (all three times). And, having the race triple back did mean seeing other runners out there on the course which was fun and encouraging. Would I do it again? Sure, why not!

My name is Meg(an), and I love to run. Via my blog, I hope to offer you my perspective on some of the races that I participate in, and perhaps to inspire you along the way to run in some of these beautiful places. View all posts by Meg